SHADOWS ON A WALL: The Autobiographical Writings of Lester Lewis Scheaffer (edited by Caroline Arnold) now an ebook at Amazon 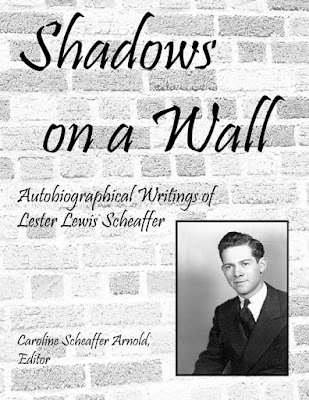 My father's memoir, SHADOWS ON A WALL: The Autobiographical Writings of Lester Lewis Scheaffer, is finally up at Amazon as an ebook. (I am the editor.) These are poems and essays about his family, growing up in Kenosha, Wisconsin in the 1920s and 1930s, and a few stories about his life as a settlement house worker. If you enjoyed reading his story, Celebration at Tea Lake (about the memorable family celebration of my parents' 13th wedding anniversary) that I recently posted at my travel blog (The Intrepid Tourist), you may enjoy reading his other stories too.
The title of the book comes from a quote by Wallace Stegner, saved by my father in a folder he called "food for thought."
I was reminded of a remark of Willa Cather's, that you can't paint sunlight, you can only paint what it does with shadows on a wall. If you examine a life, as Socrates has been so tediously advising us to do for so many centuries, do you really examine the life, or do you examine the shadows it casts on other lives? Entity or relationships? Objective reality or the vanishing point of a multiple perspective exercise? Prism or the rainbows it refracts? And what if you're the wall? What if you never cast a shadow or a rainbow of your own, but have only caught those cast by others?
Wallace Stegner, THE SPECTATOR BIRD, p. 162

My father passed away in 1994. Here is the editor's note I wrote when I published a paper copy of the book in 1996:

My father, Les Scheaffer, began this project in the late 1980's after the completion of his book Lutie and Mercy Ann, A Story of the Lockridge-Gibson Family 1875-1918, an historical account of the lives of his maternal grandparents.  The new book was to be a collection of his writings about his own life--poems, essays and stories--that focused on his family, childhood, school and early social work experiences.  Some of the pieces had been written as part of a creative writing class at the College of Marin, others were occasional pieces and some were created specifically for this project.  Two of the stories are about Camp Bovey, perhaps the greatest achievement of his life.  He once wrote, “But if there was a contest I think I would win: Camp Bovey, seventeen summers!  That was my great luck and my great love.”
From the earliest years of his life my father was a saver and keeper of records.  Many of his writings include excerpts from diaries, letters and notebooks or were inspired by them.  In all the pieces in this book as well as his other creative writing he always had the support and encouragement of my mother who was his “in house” editor and critic.  Some of the later stories are about experiences they shared.
Born in 1914 at the beginning of World War I, my father’s life encompassed the Great Depression, World War II, the Vietnam War and tumult of the 1960s, moving from the Midwest, to the East Coast, back to the Midwest and finally to California.
When my father died on May 1, 1994, he had made the final corrections on most entries but he had not yet begun assembling the book.  That job has fallen to me.  Not knowing exactly how he planned to organize the book, I have chosen to arrange the pieces chronologically and by theme.  Although I have listed myself as editor, I have changed as little as possible.  I have made a few spelling and punctuation corrections and, in a few cases, I’ve changed some words for clarity.  As far as I could tell he had not yet selected a title for the book, so I borrowed Shadows on the Wall from the Wallace Stegner quotation that he had chosen to be part of the book under a category he called “Food for Thought.”  The “shadows” in this book are vivid and multifaceted and tell us a great deal about the man that was my father.  We are fortunate that my father had the desire to tell the stories of his life and that he had the gift of telling them so well.  This book is a portrait of what it was like to grow up in a small Midwestern city in the 1920's and 30's and a glimpse into the lives of settlement workers just before and during World War II.  But that is not why he wrote it.  He wrote this book “for the kids” so that we might know a little of what made him the person he was.  For that I am glad.
Caroline Scheaffer Arnold
October 1996