THE TERRIBLE HODAG. Its Origins in Rhinelander, WI 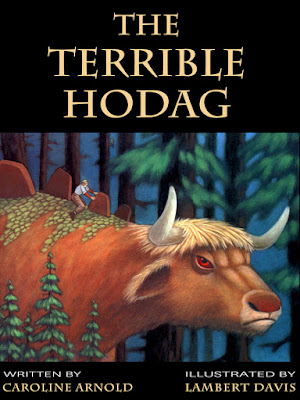 As a child, I spent my summers at a small camp in northern Wisconsin, originally called Camp Hodag, now called Camp Bovey. In the evenings we sat around the campfire telling stories of a huge creature with the head of an ox, feet of a bear, back of a dinosaur and tail of an alligator--the terrible Hodag! When I grew up and became a children's book writer I wrote some of those stories down. One of them, The Terrible Hodag, is available as a Kindle book on Amazon. It is also available in Spanish, El Terrible Hodag.

The original Hodag stories were invented more than one hundred years ago in the logging camps of Rhinelander, Wisconsin. In an article written by Emily Bright for the Wisconsin Life blog in 2016, you can read how practical joker Gene Shepard created the Hodag and perpetuated the myth until he was finally debunked by an investigator from the Smithsonian Museum. She writes, "Rhinelander still has the hodag as its mascot for the city and the high school. Hodag statues line downtown like a cow parade with fangs. ....Thanks to Gene Shepard, Rhinelander is unique—and proud of it."

In the summer of 2006, I visited Rhinelander and took the photo below of the Hodag in front of the Chamber of Commerce greeting visitors as they drive into town. 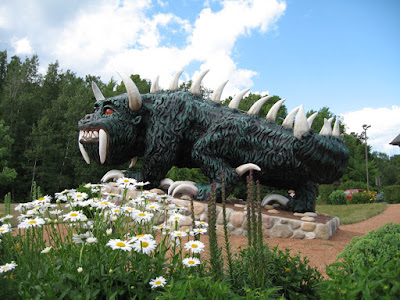 Posted by five nests at 9:22 AM No comments: