Last week I spoke to four large groups of children in Tehama County as part of an author visit sponsored by the Tehama County Department of Education and the Tehama County Reading Council.  For the event, children came from schools all across Tehama County to the historic State Theater in downtown Red Bluff.  Built in 1942 in an art-deco style, the theater has recently been restored and is used as a community resource. Each morning of the two day visit more than 600 kindergarten through third graders came to the theater, and in the afternoon I had two groups of 400 plus fourth through eighth graders.  It was a new experience for me to be on stage facing such large audiences.  But the students were an enthusiastic and appreciative audience and the large slides on the screen at the back of the stage guaranteed that everyone could see my visuals.  And at the end of the second afternoon, students and their families came for the Writing Celebration where students who had entered a writing contest received their awards.  I gave a short talk to the students and parents promoting the importance of reading and writing.
I had never been to this part of California, so I enjoyed the chance to visit. Red Bluff is at the north end of the San Joaquin Valley, about 100 miles from Sacramento.  From the main street of this charming Victorian town I could see across the Sacramento River to the snow capped top of Mount Lassen to the west.  And one afternoon, I drove north 30 miles to Redding to see the famous Sundial bridge and to take a walk along the river.
I thank Nancy Veatch, the ESS/ELA Coordinator for the Tehama County Office of Education and her staff  for inviting me to Red Bluff and for coordinating all the activities of my visit.  I also thank Karla Stroman, President of the Reading Council for all her help and Estelle for her help in selling books and getting them ready for autographing. And I really appreciated the tech support at the theater for all their help. I enjoyed my visit very much and was pleased with the good response I got from all the students and teachers and parents that I met.
Posted by five nests at 9:00 AM No comments:

Its nesting time for eagles on Catalina and I'm watching the chick grow up in the Two Harbors nest--on the live video cam. Hatched March 25th, the chick is now at that awkward age. On Thursday, May 15, at around 1:00 pm it was tagged. Here is the chick next to Mom (#82 Liberty) just before she was tagged. The chick has been identified as a girl.  Her tag is K43.
Every year I keep watch on the Catalina eagle nests via the live video.  If you want to watch what s happening at the Two Harbors Bald Eagle nest on Santa Catalina Island, California go to http://www.ustream.tv/two-harbors-cam . The nest is active from February through July. Please visit the Channel Islands Live! Eagle CAM Discussion Forum for current and past happenings at all of the eagle nests, as well as weekly updates from the biologists in the field. There are multiple cameras, so please click here for all the cams and chat combined.
You can learn more about eagles in my book A Bald Eagle's World (Picture Window Books, 2010).

Update, June 18:  The chick fledged yesterday, flying easily from the nest and out of view.  Now we will have to wait until next year for the parents to return to the nest site and raise a new family.
Posted by five nests at 1:33 PM No comments:

Amy Werner, a teacher/librarian who lived and worked in Los Angeles, California, created Melody of Words, a yearly community festival that connected local students with local authors and illustrators.  Over the years I participated in many Melody of Words festivals and have fond memories of Amy.  She was a tireless promoter of the value of books and reading. 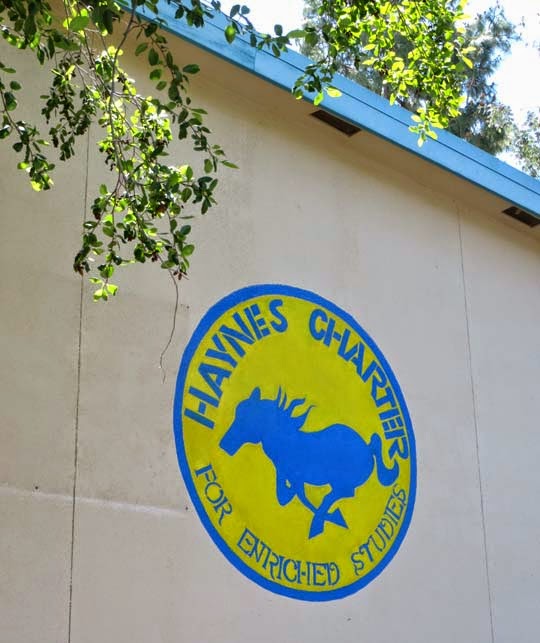 Amy was also an active member of California Readers, which supports authors and illustrators connecting with schools.  Amy recently passed away and many donations were made in her memory to California Readers. As a tribute to Amy, California Readers is using those donations to sponsor author visits to schools in the area of Los Angeles where Amy lived and worked (the West Valley) and to make a gift of the author’s books to the school.  On Monday, I had an excellent visit to Haynes Charter School, where I spoke to children in kindergarten through fifth grade.  They were an enthusiastic audience and asked excellent questions. I thank Amy Werner's family and California Readers for coordinating this tribute to her memory and for helping make my visit to Haynes School a special day.
Posted by five nests at 9:00 AM No comments:

Recently, I went to see Jackson Pollock’s painting, Mural, on exhibit at the Getty Museum in Los Angeles.  The Getty has spent the past year restoring the painting, now more than seventy years old, and has brought it back to its full glory. It is a stunning work–alive with swirling colors on a giant canvas.  Along with the painting, which occupies one room, the exhibit also explains the history of the work and the technical and artistic process of restoring it.

In 1943, art dealer Peggy Guggenheim commissioned Jackson Pollack–a relatively unknown artist at the time–  to make a painting for the hallway of her New York apartment.  It was to be a mural–wall sized–but painted on canvas. The finished painting stood 8 feet high and was nearly 20 feet wide.  It was the largest free-standing oil painting of the modern era.  But what was even more remarkable were the colors and shapes that swirled across the canvas.  No one had ever painted anything like it before.  Jackson Pollock went on to create his famous “drip” paintings, but it was Mural that marked the beginning of his prominence as a painter and the beginning of the era of large scale abstract expressionist paintings.

You can view MURAL at the Getty until June 1, 2014.  After that it will travel to Sioux City, Iowa, and then go on a world tour to Vienna, London, and other cities.  The University of Iowa is currently planning to build a new art museum.  When it is finished, the Pollock painting will be installed there.
Posted by five nests at 9:00 AM No comments: