On June 12th, I had the pleasure of attending the Judy Lopez Award dinner, celebrating Kate Klise, winner for her book Grounded, and honor book recipients Rita Williams-Garcia (One Crazy Summer), Matthew Kirby (The Clockwork Three), Lewis Buzbee (The Haunting of Charles Dickens), and Jewell Parker (Ninth Ward). Both Kate Klise and Rita Williams-Garcia were there in person to accept their awards. In her very entertaining acceptance speech, Kate Klise told how a middle-school reader had described her book saying that “it was about death, but funny too” and then used that as a tag line in her speech for her view of life in general.  She told how, as a child, she dearly wanted to look like Farrah Fawcett but ended up, when her father took her to the local barber, with a haircut more like that of one of the Beatles.  Now, with gorgeous long blonde hair, she definitely looks much more like Farrah Fawcett!  I was lucky to sit at the same table as Rita Williams-Garcia and learned that her daughters may have helped inspire the characters in her book.  For those of us who lived through the sixties, her book, One Crazy Summer, about the Black Panther breakfast program in Oakland, brought back memories of items seen on the news, but now viewed through the eyes of children.  It is no wonder that the book has received so many awards!
The Judy Lopez Awards are given by the Women’s National Book Association/Los Angeles Chapter.  They are granted annually to works of literary excellence for nine- to twelve-year-olds.
Posted by five nests at 5:08 PM No comments:

Illustrations from my book A Bald Eagle’s World are available as cards and prints at my Etsy gallery, CarolineArnoldArt.  These giclee prints make perfect gifts for anyone with a birthday or other celebration close to the Fourth of July.  While I was creating the art for the bald eagle book, I kept the second screen of my computer on the live video cam at one of the bald eagle nests on Catalina Island.  This year, there are THREE bald eagle nests in the Channel Islands that you can watch!  You can go to this website and see real, live eaglets perching on the edge of their nests waiting for their parents to bring back food (until they fledge in a month or so).  You may see the parents as well.  Wait through the annoying ad at the beginning of the video feed and then just enjoy watching the young eaglets!
Posted by five nests at 12:00 PM No comments: 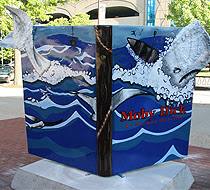 A long time ago, I was a graduate student in art at the University of Iowa in Iowa City, and I trudged up and down the hill from my downtown apartment to the art building on the other side of the river.  I wish I were there today!  Now, the town is peppered with giant “books” celebrating Iowa City as a UNESCO City of Literature.  My walk today would take me past Treasure Island, Moby Dick, House by Tracy Kidder, Home by Marilynne Robinson, Clifford Goes to Dog Daycare, Alice in Wonderland, and many more!  What a terrific way to celebrate books of all kinds.  For photos of the amazing book statues, go to Book Marks, book art of Johnson County.
Additional note:  Here's a website where you can see MORE Bookmarks with photos of both the fronts and the backs of the giant books.  The back side has actual text that you can read.
Posted by five nests at 10:58 AM No comments:

On May 28th I went to a terrific program in Walnut Creek, CA, sponsored by the Northern California SCBWI, featuring Author Mike Jung talking about how he developed his online presence BEFORE selling his first book!  His talk, Don’t Be a Pinhead: Building on Online Presence Before Landing a Book Deal, showed how he uses the internet to connect with people and become part of the online community.  His first book, Geeks, Girls and Secret Identities, comes out next year from Arthur Levine Books.  For photos and highlights of his talk, read Edna Cabcabin Moran’s post on her blog Just Sketch.  It will inspire you (and me) to do a better job of building your own online presence!
Posted by five nests at 10:54 AM 2 comments:

Wiggle and Waggle in My Big Backyard 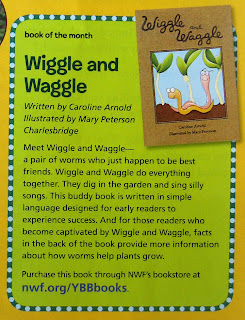 I was thrilled to find out that my book Wiggle and Waggle was the May book of the month in My Big Backyard, one of the children’s magazines published by the National Wildlife Federation. My Big Backyard is for children in the primary grades. NWF also publishes Ranger Rick for older children and Wild Animal Baby for younger children.  My grandchildren love ALL the magazines, which are filled with photos, stories, games and projects, all about nature and animals. May is the perfect month to start learning about worms as it becomes time in most places to start planting summer gardens.  My idea for the book grew out of digging up dirt for my own garden and seeing the wiggly worms in the earth.  You can order a copy of the book from the NWF bookstore and a portion of your purchase helps support NWF.
Posted by five nests at 2:00 PM No comments: