Projects for Kids: A GARDEN IN YOUR KITCHEN, Carrots

Labels: carrots, Projects for Kids: A GARDEN IN YOUR KITCHEN, STEM

Projects for Kids: A GARDEN IN YOUR KITCHEN, Citrus Fruits

Citrus Fruits
The seeds of oranges, lemons, and grapefruit also grow into nice houseplants. Plant them in potting soil, and place on a sunny windowsill. You can start several seeds in one pot, but when they grow, there will be room for only one plant. Then the plants are matchstick size, choose the strongest one and pull out the others. This is called thinning. Gardeners thin so that their plants have plenty of room to grow. 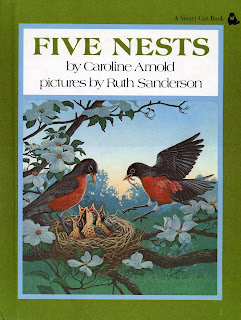 Forty years ago on April 1, 1980, my first book, Five Nests, was published by E. P. Dutton. It was illustrated with beautiful art by Ruth Sanderson. For both of us, it was at the beginning of our long careers. (Ruth already had done a few books, but has since illustrated many more.) I was thrilled to become a published author but I never imagined that I would go on to write more than 100 books, and that I would still be writing and publishing books forty years later. (My new books, which will come out in 2022, will bring my total to more than 170.)
Five Nests is a nonfiction easy-read book about five species of birds, each with a different mode of parenting. With robins, both parents take care of the baby birds. With red-wing blackbirds, only the mother cares for the young. With rheas (South American relatives of the ostrich) the father bird cares for the young of multiple females. With Mexican jays, young birds help their parents care for the baby birds hatched in the following season. And, with cowbirds, the mother lays her eggs in the nests of other species and they raise the baby cowbird when it hatches.
Despite being named an Outstanding Science Trade Book by the CBC/NSTA, Five Nests went out of print quickly. It is almost impossible to find today. Two of Ruth’s beautiful black and white illustrations from the interior of the book, in the collection of the Philadelphia Free Library, can be seen on the internet. Mexican jay eggs. Mexican jays.
In 1980, the majority of children’s nonfiction were published with black and white illustrations. That has all changed, and now almost all books have beautiful full color art, like the painting on the cover of Five Nests. I have always hoped that I might one day see Five Nests republished with new full-color illustrations. The final lines of the book, There are many different ways that birds take care of their babies. Each way is a good way., apply to people too, and are just as relevant today as they were forty years ago.

Projects for Kids: A GARDEN IN YOUR KITCHEN, Birdseed

Birdseed
If you have a pet bird or a bird feeder for wild birds, you can try growing birdseed. Plant your birdseed in a pot filled with potting soil. The small, round seeds are millet. Sunflower seeds, if planted outdoors, will grow into plants much taller than you are.
Here is another way you can watch your birdseed sprout. Fill a shallow tray or the top of an egg carton with vermiculite. (You can get this at a garden store.) Sprinkle it with birdseed, and water it. Then cover it with plastic wrap. This keeps the moisture inside so the seeds won’t dry out. In a few days you will see your seeds begin to sprout. Then remove the plastic.
Each seed has food inside it for a new plant to grow. But after a few days the plant uses that up. Then it needs to get nutrients from the soil so it can make its own food with sunlight and the chlorophyll in its leaves. When your birdseed plants are the size of a matchstick, transplant them into a pot with dirt or into your garden outside.

Projects for Kids: A GARDEN IN YOUR KITCHEN, Herbs and Spices 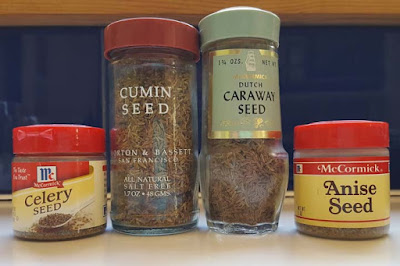 Herbs and Spices
Many herbs and spices are seeds. You might find caraway, cardamom, celery, anise, mustard, sesame, or poppy seeds on your spice shelf. Try planting some of them to see if they will grow. You can fill an egg carton with potting soil and plant a different kind of seed in each cup. Use a craft stick to label each section. Then you will know which plant is which when the seeds grow. When a plant is about two inches tall, it should be transplanted to a larger container.

STUCK AT HOME SCIENCE from the California Science Center 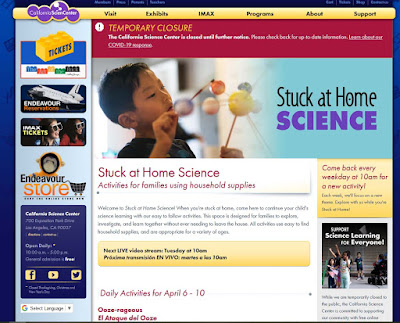 The California Science Center in Los Angeles is closed until further notice, but their website has all kinds of fun activities that kids can do at home. Every weekday at 10am (PDT) they have a new activity.  Check out their STUCK AT HOME SCIENCE page for more information.
Posted by five nests at 11:53 AM No comments:

Projects for Kids: A GARDEN IN YOUR KITCHEN, Fresh Vegetable Seeds

Fresh Vegetable Seeds
You can try growing the seeds of some fresh vegetables. The seeds inside fresh beans and peas, cucumbers, and squashes will grow if you dry them out first. These will grow best if planted outside.
You can experiment with other seeds and plants around your house. It’s fun to discover how things grow–and you’ll end up with a beautiful garden in your kitchen!