Recently, I spent several days in beautiful Yosemite National Park, staying in Wawona at the south end of the park. Among other facilities, the community includes an elementary school and a charming public library nestled in the redwoods. The Bassett Memorial Library is part of the Mariposa County Library system. As I often do when I travel, I stopped in to meet the librarian and had a nice chat. I learned that the library has a very supportive Friends group that helps keep it open every day. While the library is small, I was told that people can order books from anywhere in the system and have them sent to the library. So I looked up the online catalogue and was pleased to discover that the system lists 109 of my books, including Hatching Chicks in Room 6 and most of my other recent books.
Posted by five nests at 9:00 AM No comments: 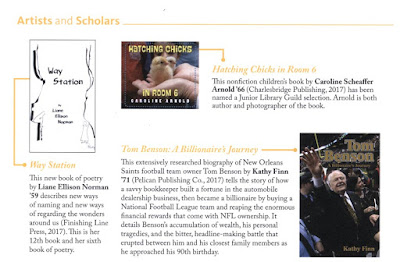 My summer issue of Grinnell Magazine just arrived and it includes an announcement of my book Hatching Chicks in Room 6 in its Artist's and Scholars section--books and creative works by alumni of Grinnell College.
Thanks Grinnell! 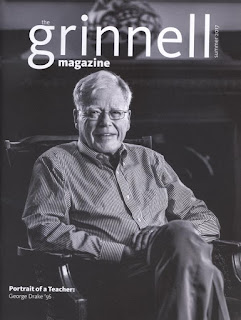 The cover of the magazine features George Drake '56, one of Grinnell's outstanding presidents, among his many other roles at the college. We heard him speak at the 2017 50th Reunion of the Class of 1967.

Note: This is a repost of my 6/19/17 post on my travel blog The Intrepid Tourist. It seemed to fall in both categories--travel and art--so I thought it worth posting here as well! Enjoy!
On my third and last day in Montreal I headed to the Musee des Beaux Arts (Montreal Museum of Fine Arts), about thirty minutes from my hotel, on the other side of the city center. For part of the way I walked along Boulevard de Maisonnueve, past the tall buildings that are the business center of Montreal, many with fascinating installations of large public sculptures. I then cut over to Rue Sherbrooke, passing by the McGill University campus before arriving at the museum, actually a complex of buildings on both sides of the street.
The featured exhibition was Chagall: Colour and Music, a grand display of the life work of Marc Chagall with examples of his paintings, drawings, theater sets, costumes, stained glass, sculpture, ceramics, book illustrations and more. Room after room, filled with creations by this prolific artist, dazzled the eye, beginning with a movie about his early life in Russia and participation in the Yiddish Theater.
Music played throughout the exhibit, reinforcing the interconnectedness of sound, color, light and movement that infuses the work of Chagall. On the wall above his self portrait was this quote: “Everything you say is right. So guide my hand. Take the brush and, like the leader of an orchestra, carry me off to far an unknown realms.” Marc Chagall
Themes from village life in rural Russia appear again and again in Chagall’s paintings, often with a figure playing a violin. In a display case in one of the rooms was a beautiful klesmer violin.
Several rooms displayed mannekins with costumes Chagall had designed for plays and operas. My favorites were those he created for Stravinsky's Firebird ballet, inspired by the Katsina dolls of the American Southwest.
Another room displayed examples of Chagall's stained glass windows, documenting the process from idea to drawing to the finished glass.
Because I had to catch a plane later that afternoon, the only permanent exhibit I was able to view in the museum was the display of Inuit Art, a small but fascinating collection of art by contemporary Canadian Native American artists. I wished I had more time to see the many other rooms in the museum with art from various historical periods.
The Chagall exhibit was on view January 28 to June 11, 2017. 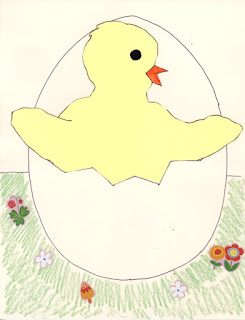 Here is a fun and easy activity you can do in conjunction with reading my new book, Hatching Chicks in Room 6. You can make a jaunty chick popping out of its egg with the following downloadable templates, some crayons, stickers and your imagination.
Print the chick design on yellow cardstock. (Directions are included on the printout.) 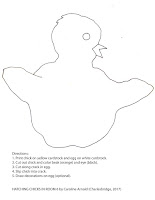 Print the egg design on white or cream cardstock. 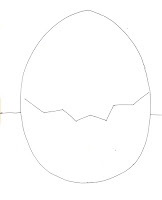