THREE OF MY DINOSAUR BOOKS Now at StarWalk Kids

Three more of my books have been added to the growing catalogue of books at StarWalk Kids Media.  They are:

Dinosaur Mountain: The 1909 discovery of bones protruding from a sandstone mountain in Utah led to the unearthing of other remains and proved to be one of the greatest fossil discoveries of the century. The site is still being excavated and is a continuing source of new information about dinosaurs.

Dinosaurs All Around:
On a visit to the workshop of dinosaur artists Stephen and Sylvia Czerkas, where a life-size dinosaur model is being constructed, the reader learns what dinosaurs really looked like, how we know how big they were, how they moved, and what color skin they may have had.

Dinosaurs Down Under:  A look at the unique fossils of prehistoric Australian creatures ranging from huge lizards to now extinct giant marsupials. The story follows the journey of a museum exhibit, on loan from Australia, as it is  is shipped, assembled, and displayed in a Los Angeles museum.

As always, I am delighted that these books are once again available, now for a new generation of kids.

One of my first illustration assignments was for a book about gardening activities with children.  At that time, most books for children were illustrated with black and white art so I made pencil drawings.  Here is one of the activities meant for younger children.  It would work well with pre-school or kindergarten children. 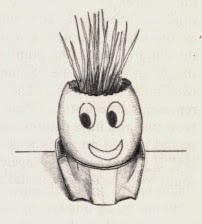 Break away 1/4 of the pointed end of an egg shell, and empty the contents.  Have the children draw a face on the shell using felt pens, then fill the shell with moist soil and plant chives or wheat seed.  Make a stand from a cardboard egg carton. Place the egg head in the stand.  Water lightly each day.

From Children’s Gardens: A Field Guide for Teachers, Parents and Volunteers by Elizabeth Bremner and John Pusey, Illustrations by Caroline Arnold

Posted by five nests at 5:19 PM No comments:

NEW YORK, NY, June 18, 2014 -The two auctions of children's book art that were held in conjunction with this year's BookExpo America were a great success, the American Booksellers Foundation for Free Expression (ABFFE) reported today. The sale of 150 pieces by leading artists and illustrators raised $56,000 to defend the free speech rights of young readers. The BEA auction, co-sponsored by ABFFE and the ABC Children's Group at the American Booksellers Association, was held in the River Pavilion of the Javits Convention Center. An online auction was conducted the following week. The BEA auction, which was chaired by Jarrett J. Krosoczka, featured a variety show by the Slushpile Family Circus, a group of authors and artists who displayed some of their non-literary talents. Shannon Hale and Michael Buckley organized the show. "We had a lot of fun and the art was superb," ABFFE President Chris Finan said. "We are tremendously grateful to Jarrett, Shannon and Michael and to the artists and bidders who made the auction such a big success."

Auction proceeds support Banned Books Week, the annual celebration of the freedom to read, and the Kids' Right to Read Project, which is co-sponsored by ABFFE and the National Coalition Against Censorship.

[I donated a print "Mother and Baby Panda" from my book A Panda's World to the auction. I was delighted to discover that it was purchased by my good friend Cathy Bonnell. ]
Posted by five nests at 9:00 AM No comments:

Two weeks ago I did an author visit at Brockton Avenue Elementary with 43 enthusiastic children in Ms. Cotten and Ms. Nieman's Pre-K class, winner of the school's Million Word Challenge. Outside of school, these students had read more than 1600 pages with their parents and with volunteers from the community.   The Million Word Challenge is a county-wide campaign that encourages students to spend time reading outside of the classroom. A winner was chosen from each school to receive a gift card from Target to purchase books. As an incentive for more participation, the classroom also received visit from a children's author. That was me!  I read several of my books and had the children participate in a "lion hunt" after I read my book A Zebra's World.
My visit was arranged through Read to a Child Los Angeles, a non-profit that pairs corporate volunteers with elementary school students from Title I elementary schools. It currently serves 171 students with 236 volunteers across 7 schools in LA County.

To change the world around you,
Give the world
What you have
And serve the world
With what you are.
–Sri Chimnoy
The Peace Run, founded by Sri Chimnoy, is a global torch relay that symbolizes humanity’s universal aspiration for a more peaceful world. Now in its third decade, the Peace Run is humanity’s largest and longest grassroots effort for peace. Since its inception the torch has visited more than 140 nations.
Along the route people in thousands of communities — from children to senior citizens, from everyday folks to world leaders — join the Peace Runners by carrying the torch a few steps or a few miles, each person adding their hopes and dreams in a global wave of friendship and goodwill. Through direct participation and media coverage, the Peace Run touches the lives of millions.
On Sunday, June 8th, the Peace Run team arrived in Santa Monica at Reed Park Recreation Center at Lincoln and 7th Street. I was there to meet the team as they finished their run from Long Beach and to receive a special torch bearer award, along with two other people, Magdelana Kuehne and Marvin Thompson. Magdalena Kuehne, Masters Track and Field star, was honored for her outstanding achievements in athletics. At age 83 she maintains the world record for triple jump in her age group. Marv Thompson is the founder of the Los Angeles Patriots track and field club and has coached star athletes for 35 years. My award was for my dedicated work writing books for children. We had been chosen by members of the Sri Chimnoy group as people who have contributed to the community through sports, the arts, education, and by example, to help improve the lives of others.
Each of us was presented by a member of the group and given a medal, a t-shirt, pen, and a certificate of appreciation signed by all the runners. I thank my brother Tom (Pujari) for nominating me for this honor and the Peace Run team for its efforts to spread world peace. For more photos of the Peace Run's visit to Long Beach and Los Angeles, click HERE. This year’s North American Peace Run began in April in New York, and will circle through the United States, Mexico, and Canada before returning to New York in August. To learn more about the Peace Run, go to www.peacerun.org .

“Peace does not mean the absence of war. Peace means the presence of harmony, love, satisfaction and oneness.”  Sri Chimnoy
Posted by five nests at 7:30 PM No comments:

An auction of more than 50 pieces of art created for children's books launched on eBay yesterday, the  American Booksellers Foundation for Free Expression (ABFFE), the bookseller's voice in the fight against censorship, announced.   The ABFFE Children's Book Art Auction, which supports the free speech rights of kids, features many original works and high-quality prints by some of the leading artists and illustrators working in the book industry today, including Harry Bliss, Rosemary Wells, Bob Staake, Robin Preiss-Glasser, Jarrett J. Krosoczka, Matt Phelan, and Brian Briggs and one of my prints, Mother and Baby Panda from my book A Panda's World.
The auction ends on June 9.

NOTE:  The ABFFE auction is over but you can still get the print by going to my art gallery at Etsy. Click HERE to go directly to the mother and baby panda print.
Posted by five nests at 9:00 AM No comments: