THE GOLDEN GATE BRIDGE: Where Do Book Ideas Come From? 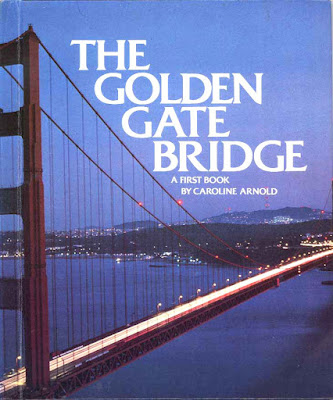 I never know where the idea for my next book is going to come from. In this case, it was a chance encounter as I browsed a volume of my encyclopedia.

I saw the Golden Gate Bridge in San Francisco for the first time more than fifty years ago, when I helped my parents move from their home in Minneapolis to Marin County in Northern California. The bridge's enormous orange towers and soaring cables suspended over the deep water of the channel below made a big impression on me–it was both a thing of beauty and a triumph of engineering. My fascination with the bridge grew as I made regular visits to my parents.
In 1985, nearly twenty-five years after my first acquaintance with the bridge I was at home in Los Angeles working on a new book. While I was looking up a fact for that book in the “G” volume of the encyclopedia, I happened upon an article about the Golden Gate Bridge. I started reading and discovered that the construction of the bridge had been completed in 1937. I realized that in two years the bridge would be turning fifty, and most likely there would be a big celebration. It was the perfect time to write a book about the bridge. So I did. That book, THE GOLDEN GATE BRIDGE, was published by Franklin Watts in 1986, just in time to go into school and public libraries so kids could learn about the famous bridge that connects San Francisco to Marin County and northern California.The book is now long out of print, but may be in some libraries.

The Golden Gate Bridge celebrated another milestone, its 75th birthday, in 2012. You can read about it at my travel blog, The Intrepid Tourist. In just eighteen more years, the bridge will be 100!
Posted by five nests at 8:00 AM