This week marks the 100th anniversary of Ray Bradbury, the author of The Martian Chronicles, Fahrenheit 451 and so much more. Until his death in 2012 he was my neighbor. I never saw him, but I often passed his modest yellow house in Los Angeles, just a few short blocks from mine, as I drove home from the supermarket. I remember loving his books when I read them in high school and college. In 2012, when I read in the paper that he had died at the age of 91, I wondered what would happen to the house that had been his home for more than fifty years. Then one day, as I drove by, I saw bulldozers knocking it down. Over the next year, in its place, a striking modern architectural edifice rose up and filled the property. Ray Bradbury fans were appalled, but it was too late. (For a time line of the house’s history, click HERE.)

On a recent daily walk, I passed the property and saw it up close for the first time. Much of the new house is hidden behind dense shrubbery. At the entrance is an elaborate iron gate whose design is made of intersecting letters. As we passed, I noticed a small sign. It reads:

Ray Bradbury, American author and screen-writer, wrote many of his greatest works in the home that once stood on this site. To pay homage to his life and spirit, the design of this gate incorporates his words.

“Living at risk is jumping off a cliff and building your wings on the way down.”
"I never ask anyone else's opinion. They don't count."
"Don't think. Thinking is the enemy of creativity."
“Stuff you eyes with wonder,” he said, “live as if you’d drop dead in ten seconds.”
"Everyone must leave something behind when he dies, my grandfather said."

Then, as I looked closely, I could see the words embedded in the gate design. While individual words and letters are discernible, it is a bit hard to distinguish the whole quotes among the surrounding metal. Even so, the fact that they are there to connect us with Ray Bradbury and his work means he is still part of our neighborhood.

After finding the sign, I wanted to read Ray Bradbury’s books again. When I went to the Los Angeles Public Library website I discovered that many of his books are available to borrow as digital copies. I checked out Dandelion Wine (1957), his semi-autobiographical book about his growing up years in Waukegan, Illinois (renamed Green Town in the book) and downloaded it to my computer. As I have been reading the stories–about making dandelion wine, the pleasure of fresh cut grass in the summer, his elderly neighbors and their “Green Machine”, and more–they bring back memories of childhood visits to my grandparents' house in Kenosha, Wisconsin, a similar midwestern town just up the road from Waukegan. While the time period of Bradbury’s stories about Green Town is nearly a century ago, the essential human qualities of the characters are universal.

I never would have discovered the sign on the gate if it hadn't been for the need to get out of the house in our self-isolation in response to the corona virus. My perspective has changed as I take my daily walks through my Cheviot Hills neighborhood in West Los Angeles. I see things up close. I have more time to linger and take a second look. I hear the birds sing and the noisy flocks of parrots foraging in the eucalyptus trees overhead. I see my neighbors’ houses and the diverse ways that they have landscaped their front yards. And I have rediscovered Ray Bradbury, one of America’s greatest writers.

(Republished from my travel blog The Intrepid Tourist 5/4/20.)
Posted by five nests at 8:00 AM No comments:

I recently received this notice from my local library:

This summer Palms-Rancho Park Branch Library in Los Angeles is celebrating the centennial birthday of Ray Bradbury with a bookmark contest, graphic novels/comic book creation, and discussions. Join us as we recognize his long legacy of storytelling and library advocacy, August 22 - 29, 2020.

Ray Bradbury was a local resident and a long time supporter of libraries. He is one of my all-time favorite authors.

For more about Ray Bradbury and his books go to the LAPL Blog. 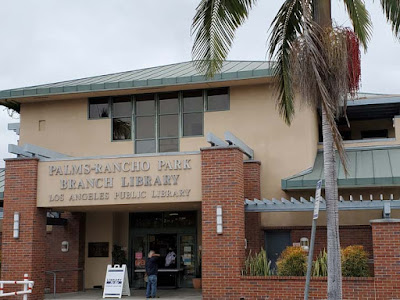 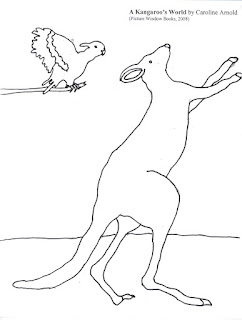 A sulphur-crested cockatoo looks on as a young kangaroo stands up tall and punches with its paws. During play fights, young kangaroos do not hurt one another.
Did you know that an adult grey kangaroo can jump 30 feet (9 meters) in a single bound and leap over a fence 9 feet (2.7 meters) high?  Its long, heavy tail keeps it from tipping forward as it hops. To jump, a kangaroo springs forward on its hind feet.  Inside each leg is a tendon, which acts like a large rubber band.  When the kangaroo lands, each leg bends, and the tendon stretches.  On the next forward leap, the tendon contracts as it snaps back to its resting position.  This pushes the kangaroo forward.
Click here for a downloadable coloring page.  You can find out more about kangaroos in my book A KANGAROO'S WORLD (Picture Window Books, 2008) and in KANGAROO (StarWalk Kids, 2013) downloadable to your Kindle. 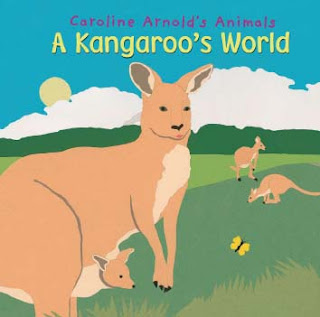 Are you looking for something to do while school is out for summer vacation? At my website you can find FIFTY NIFTY PROJECTS that you can do in connection with reading my books. Most of the the projects use materials easily found at home or at school. They range from writing a pyramid poem to putting stripes on a zebra (cut paper art) to simple science experiments like finding out how icebergs affect sea level.

Go to My Books at my website to find more information about the books that inspired these projects. Many of the books are available as e-books that you can download from Amazon and other platforms.

Have fun!
Here are a few examples of the projects you can do: