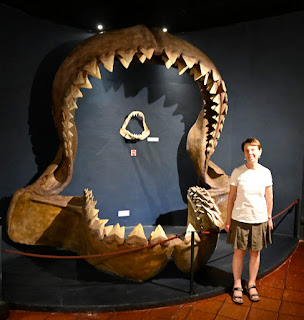 On my recent trip to Chile, I went with my family on an excursion to the Colchagua Museum in Santa Cruz, about a two hour drive from Santiago. The museum begins with the history of the world with fossils from the Earth's past. The fossils include the giant jaws of Megalodon, the huge, now extinct shark that roamed the seas until the beginning of the last Ice Age. It was like meeting an old friend. I had learned about Megalodon when I wrote my book, Giant Shark, published by Clarion Books, and have seen models of its jaws in various museums. It is always impressive! 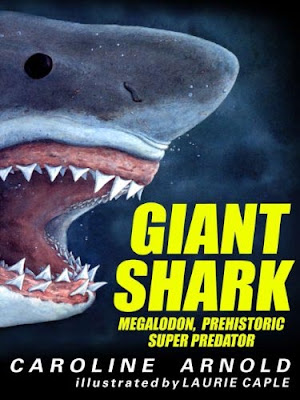 Giant Shark: Megalodon, Prehistoric Super Predator with striking illustrations by Laurie Caple is now available as an Kindle e-book on Amazon. It is published by StarWalk Kids Media .  Originally published by Clarion Books (2000), the hard cover edition is now out of print.  This has always been one of my most popular books so I am thrilled to see it available again.

For millions of years, a massive shark more than twice as huge as the modern-day great white shark cruised the depths of the ocean, attacking and devouring prey. Fossil remains reveal megalodon to have been more than fifty feet long, with razor-sharp teeth, each the size of a human hand, and jaws so large it could swallow prey larger than a common dolphin. Fluid, detailed watercolors accompany this clear and accessible account of one of the most incredible creatures to inhabit our world.
Posted by five nests at 8:00 AM