PUT THE STRIPES ON THE ZEBRA WORKSHOP at Beach School, Piedmont, CA 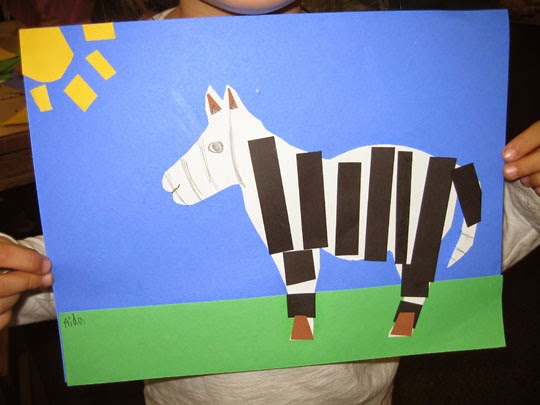 Last Wednesday I had a delightful visit with two classes of  kindergarteners at Beach School in Piedmont, California. We met in the library where I made a short presentation about my books and my cut paper illustration process and then the children got their chance to be illustrators too as they did the art project “Put the stripes on the zebra.” 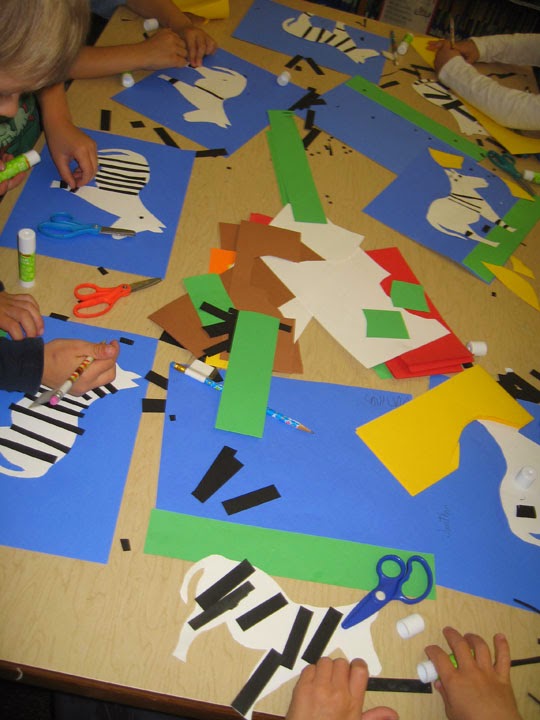 The children glued black stripes on pre-cut zebra silhouettes and then put their zebras on backgrounds of blue and green paper. Then they added their own cut-out objects–suns, clouds, and even volcanoes. I am always amazed how each piece of art is unique even though all the children start with the same materials. The project is inspired by my book A Zebra's World , one of four new titles in the Series Caroline Arnold's Black and White Animals. 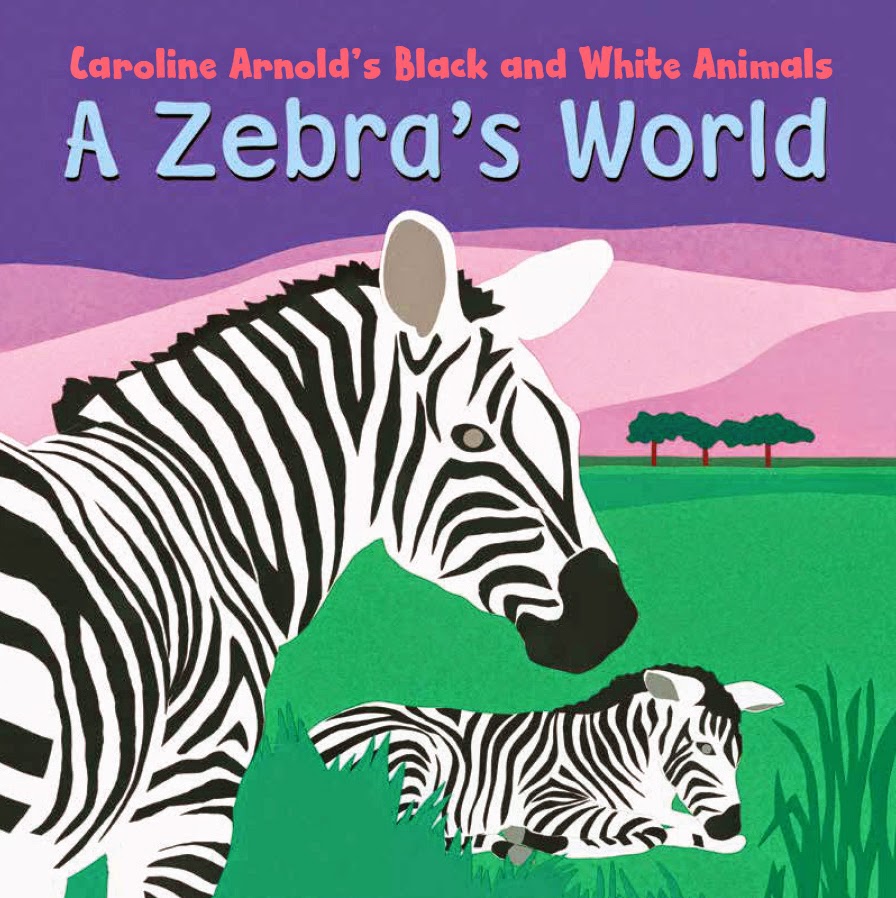 At the end of the visit the children had a chance to check out books and to watch a short slide presentation of i-pad photos showing them in the process of doing the project. I thank librarian Robin Ludmer for inviting me to Beach and for organizing my visit so well. I also am thankful to the parents who helped. It was a very successful morning! 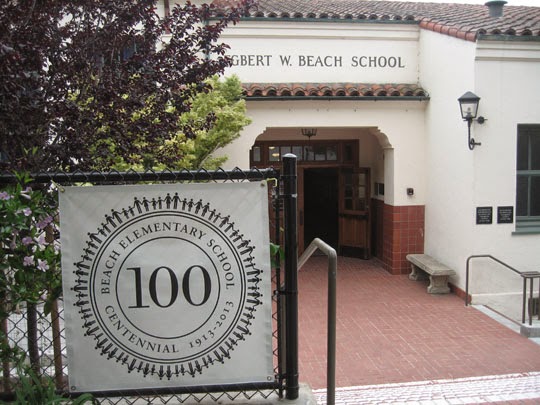 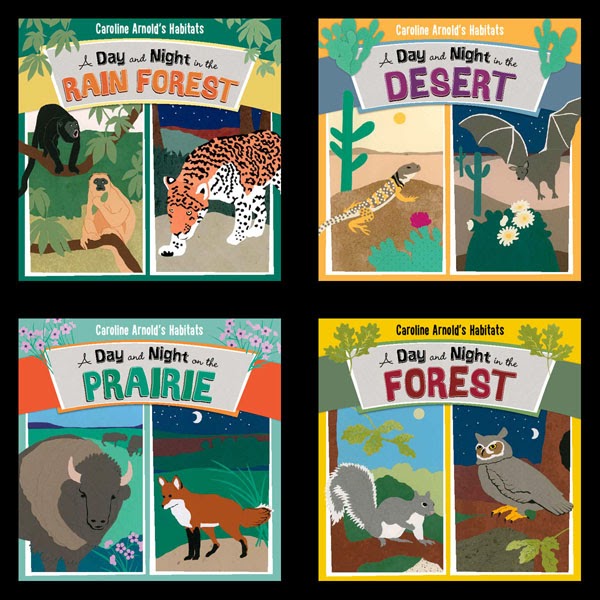 Posted by five nests at 9:05 AM No comments:

THE EARTH IS OUR HOME: Celebrating Science with Children and Families at the Los Angeles Public Library

On April 3rd  I was a guest speaker at the Saturday Family Program in the Children’s Literature Department at the Los Angeles Public Library in downtown Los Angeles. It was a fun afternoon with a lively group of children and their parents. We met in the Story Theater. April is Science Month and Earth Day so the focus of the program was on protecting the Earth. Librarians Mara Alpert and Linda Israelson began the program with three songs–This Land is Your Land, E-A-R-T-H (to the tune of Bingo) and This Old Earth, and reading two picture books–The Earth Book by Todd Parr and The Earth and I by Frank Asch. Then I gave a presentation about my books, focusing on animals and how worms help the garden grow. I read my book Wiggle and Waggle and at the end of the hour, the participants took home some Wiggle and Waggle activity sheets. I thank FOCAL (Friends of Children and Libraries) for sponsoring my participation. Throughout the year FOCAL will sponsor more author visits to the Central Library Saturday programs. 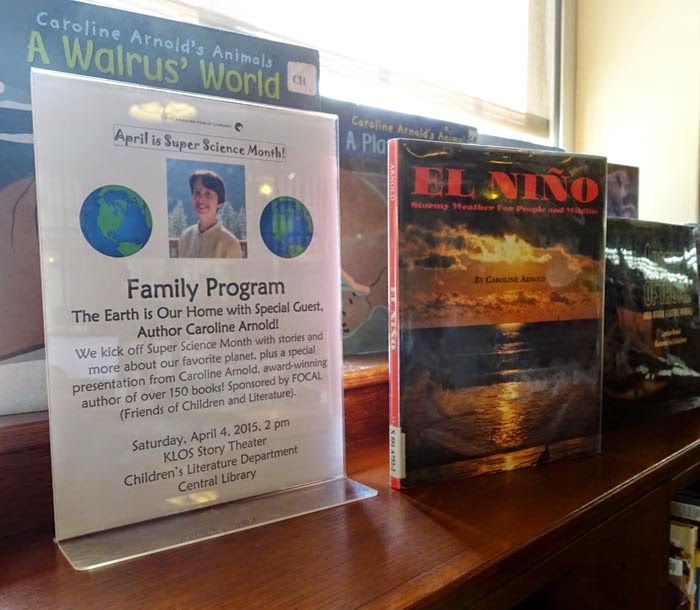 April is Poetry Month! In February, I attended a poetry workshop called Poetry Jar Jamboree at the Charlotte S. Huck Children’s Literature Festival led by award winning poets Kristine O’Connell George and Rebecca Kai Dotlich in which they took a lively look at creative ways to employ a humble jar as a creative writing portal in the classroom–or at home. From the jars themselves–a jam jar, pickle jar, milk bottle–to their varied contents and other uses, they showed how simple things in our lives can be the jumping off place to write a poem.
In one exercise, a jar was filled with colored slips of paper, each with a single word written on it. Kris and Rebecca then demonstrated how one can brainstorm with the word through drawing pictures--as a tool for describing the word--as well as creating word webs--as a way of thinking of verbs, metaphors and other associated ideas. Then, each of us in the workshop drew a slip of paper from the jar and took a few minutes to begin to construct a poem. I drew the word “fence”. It brought to mind a fence I had once seen on an abandoned ranch as we drove through land now part of a wildlife preserve in California's Carrizo Plain. I wrote: Running through tall, dry grass, the fence leaps into the hills, its tilted posts strung tight with twisted wire. That’s as far as I got in the limited time, but it was a beginning. It needs more work, but I could see how this exercise helps make writing poetry much more approachable, especially for people like me who don’t consider themselves poets. Thank you Kris and Rebecca!

SLOCRA Evening With Authors and Illustrators in Shell Beach, CA

On March 27 I had the honor to be one of six children's book authors to speak at the San Luis Obispo CRA annual evening with authors and illustrators at the Spyglass Inn in Shell Beach, California, with its beautiful view of the California coast. I thank Michael Shaw and his committee for inviting me and for doing such a wonderful job of organizing the evening! It was great to be part of this celebration of books and reading and I loved hearing from the other authors and illustrators and learning about their careers. (We each had about five minutes to tell about ourselves.) And as an extra bonus, we had the chance to sell our books and autograph them at the end of the evening. I thank my publisher, PictureWindow Books for donating copies of my new book A Day and Night in the Rain Forest for members who sat at my table. The dinner was delicious and my husband and I had a very comfortable stay at the Spyglass Inn.

Last week I did an author visit at Hephatha Lutheran School in Anaheim, California. I enjoyed my day at Hephatha very much. I thank second grade teacher Linda Staake for inviting me for Author Day and making all the arrangements for my visit. I was pleased with the good response to my presentations and I think the students had fun with the workshops. I thought the mixed up animals made by the primary students were very creative! The fourth and fifth grades made pyramid poems and the middle school students did a project called Waste Basket Archeology. I also thank one of the Hephatha parents, Mrs. Keefe, for helping me throughout the day and for getting lunch. It was a full and productive day!
Posted by five nests at 9:00 AM No comments:

A week ago I had the chance to spend an hour with students in the LA’s Best Young Authors’ program at Coldwater Canyon School in Los Angeles. This after school program encourages young authors to develop their writing. I shared some of my books and what it is like to be an author and then asked the students to share some of their writing with me. I was impressed by their creativity. They were working on their own books about a person who was important in their lives. Many of them had chosen to write about their mothers, sisters, or other members of their families. They had also illustrated their books with drawings. At the end of the hour I read my new book A Day and Night in the Rain Forest while they colored their own rain forest pictures. It was a fun and productive afternoon!
Posted by five nests at 2:18 PM No comments: 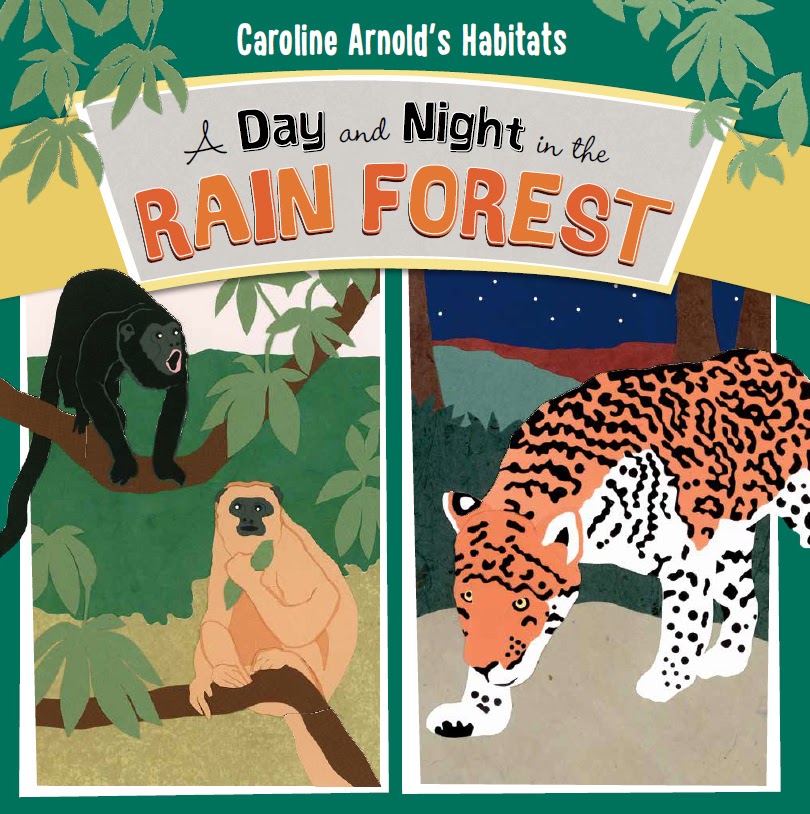 I was pleased to get this great review of my new book A Day and Night in the Rain Forest  by Angela Leeper in the April 1 issue of Booklist, a publication of the American Library Association. Here is the review:

Habitats don’t just shut down when the sun sets. In Caroline Arnold’s Habitats series, the prolific author shows that life in the rain forest revolves around a 24-hour cycle. At 6:00 a.m., the toucans call "Cricka, cricka!" and begin a busy day hunting for food. Throughout the day, animals ranging from the emerald tree boa to the sloth join in the search. As the sun goes down, these animals look for safe places to sleep, while the nocturnal armadillo, jaguar, and tarantula awaken to look for their food. Accented by attractive cut paper illustrations, the text not only recounts the animals’ eating habits but also their physical characteristics, adaptations, movement, and defenses as well. Extensive back matter includes a description of a tropical rain forest, a map of rain forests around the world, and fun facts.  Angela Leeper
Posted by five nests at 9:00 AM No comments: