When I was researching my book Monkey (Morrow Junior Books, 1993), I ran across this unusual painting by 16th Century Flemish artist Pieter Bruegel the Elder depicting two red-tailed macaques chained to a windowsill overlooking the harbor in Antwerp. My book, illustrated with photos by Richard Hewett, depicts the same species and follows the growth of a young macaque at the Los Angeles Zoo. 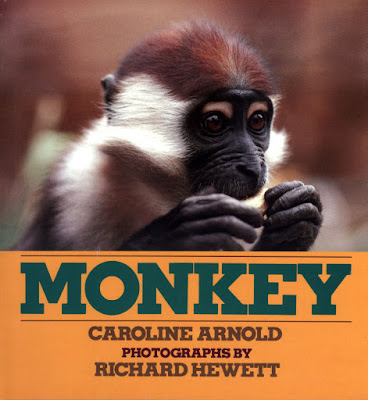 A friend just sent me the link to an article about the painting, which is currently on exhibit in Vienna. The panel is one of 28 paintings by Pieter Bruegel the Elder (only 40 of his works are known to survive) on display in a once-in-a-lifetime exhibition at the Kunsthistorisches Museum in Vienna.
No one knows what might have inspired Pieter Bruegel to choose the monkeys as his subject in this small painting or what they signify. However, the red-tailed macaques, native to the forests of west Africa, surely must have been as fascinating and exotic to the citizens of Antwerp as they are to visitors to the zoo today.
My book Monkey is out of print in hardcover but available as an ebook on Amazon.
Posted by five nests at 8:00 AM No comments: 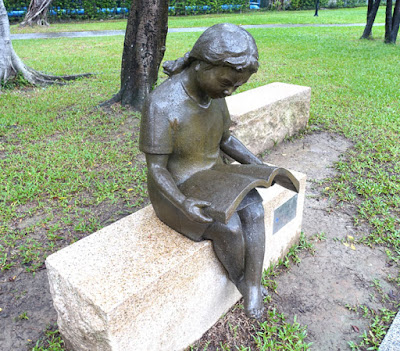 On my recent trip to Taiwan, I discovered this charming statue of a girl reading in the park adjacent to Sun Yat Sen Memorial Hall in the capital city of Taipei. I love that she seems totally absorbed in her book and that reading is celebrated in this public place. Taiwan has one of the highest literacy rates in the world--98.7 percent. Besides learning to read and write Chinese, children begin learning English in first grade at school. 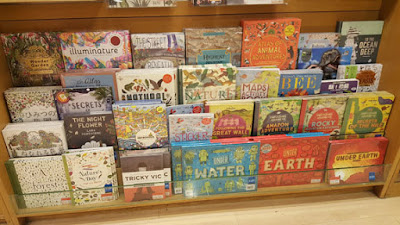 During my visit I stopped in at the large Eslite bookstore in Taipei and found a wide variety of books for children in both Chinese and English. I also found Chinese translations of many popular English language books, including one of my all-time favorites, The Little House, now celebrating its 75th anniversary. 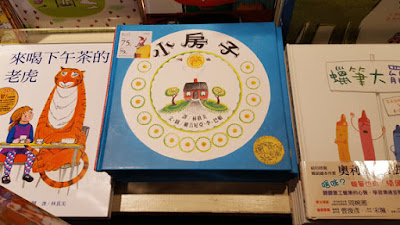 And, to my surprise, I discovered that what I thought was strictly an American holiday--Halloween--is enthusiastically celebrated in Taiwan as well. As in America, children love to dress in scary costumes and go out trick or treating. The bookstore was full of Halloween themed books to help celebrate. 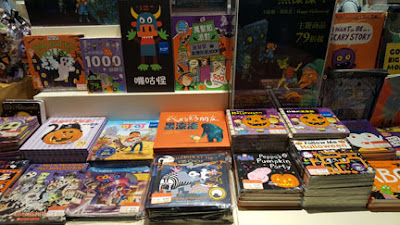 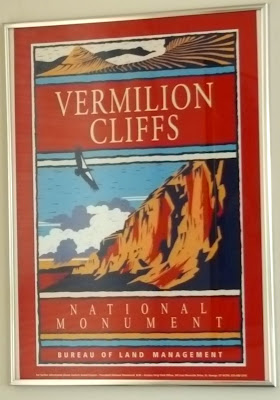 On September 22nd, National Public Lands Day, four condors were released by the Peregrine Fund atop the spectacular cliffs in Vermilion Cliffs National Monument in northern Arizona. A friend was there and brought me a beautiful poster celebrating the event. She knew about my interest in condors from my book On the Brink of Extinction: The California Condor, which was written and published at the time of the first release of captive bred birds.The poster, now framed and hanging in my office, is a wonderful reminder of the success of the recovery program. Condors are still very endangered, but their numbers are increasing. 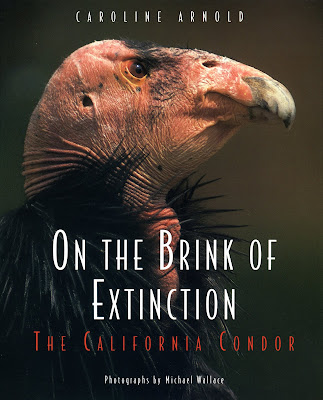 At the time I wrote On the Brink of Extinction (Harcourt, 1993) I worked with Michael Wallace, head of the Condor Recovery Program at the Los Angeles Zoo and whose photographs illustrate the book. Condors are now produced at The Peregrine Fund’s World Center for Birds of Prey in Boise, Idaho, the Oregon Zoo, Los Angeles Zoo, and San Diego Zoo Safari Park and then transported to release sites annually for release to the wild.
The historical California Condor population declined to just 22 individuals in the 1980s when the greater California Condor Recovery Program was initiated to save the species from extinction.  As of July 25, 2018 there were 85 condors in the wild in the rugged canyon country of northern Arizona and southern Utah and the total world population of endangered California Condors numbers nearly 500 individuals, with more than half flying in the wilds of Arizona, Utah, California, and Mexico.
The Arizona-Utah recovery effort is a cooperative program by federal, state, and private partners, including The Peregrine Fund, Arizona Game and Fish Department, U.S. Fish and Wildlife Service, the Bureau of Land Management’s Vermilion Cliffs National Monument, Grand Canyon and Zion national parks, Utah Division of Wildlife Resources, and Kaibab and Dixie national forests among many other supporting groups and individuals.
For more information about California Condors in Arizona:
http://www.peregrinefund.org/condor
Posted by five nests at 8:00 AM No comments: 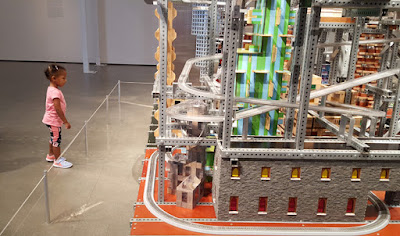 On the first level of the Broad Museum of Contemporary Art at LACMA is a wonderful miniature city with buildings, roads, vehicles and more. Built by artist Chris Burden, Metropolis II it is a delight for adult and child alike. One can view the sculpture at eye level, or from a surrounding walkway above. On the day I visited I came between the scheduled action sessions, but even so, or perhaps because the vehicles were locked in place, it made the complexity and detail of the structures within the maze of tracks even more impressive. 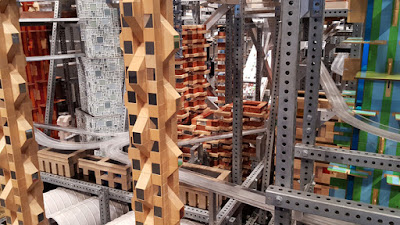 The exhibit is ongoing and included with the general admission to the museum. It is well worth a stop if you are visiting LACMA. 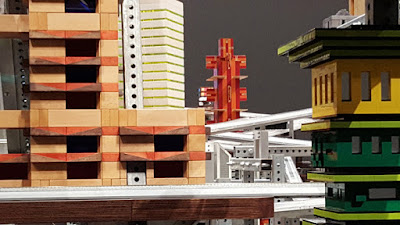 Chris Burden's Metropolis II is an intense kinetic sculpture, modeled after a fast paced, frenetic modern city. Steel beams form an eclectic grid interwoven with an elaborate system of 18 roadways, including one six lane freeway, and HO scale train tracks. Miniature cars speed through the city at 240 scale miles per hour; every hour, the equivalent of approximately 100,000 cars circulate through the dense network of buildings. According to Burden, "The noise, the continuous flow of the trains, and the speeding toy cars produce in the viewer the stress of living in a dynamic, active and bustling 21st century city." 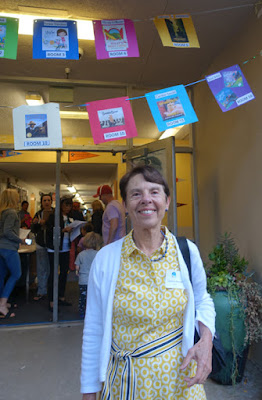 Last Friday evening the children of Westwood Charter Elementary in Los Angeles, California, came to school dressed in their pajamas ready to listen to stories from me and thirteen other children’s book authors as part of the school's annual Bedtime Story Jam. In between sessions they ate milk and cookies and browsed for books at the book fair in the library. 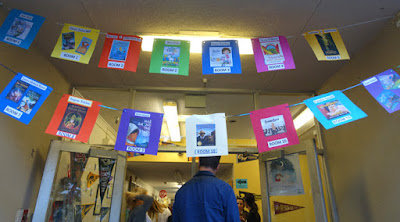 This was my second time to participate in this fun celebration of reading. I had two groups of very enthusiastic children and their parents in my room. I showed slides, read my book Hatching Chicks in Room 6, talked about birds and eggs and feathers, and signed books. 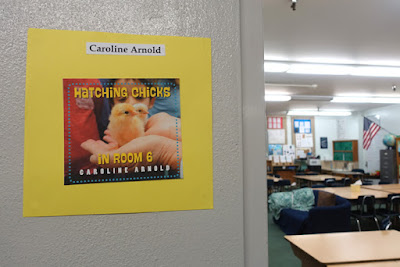 I thank Karen Boyarsky, my volunteer room host, for helping me to set up and for making sure that everything ran smoothly. Karen is a retired librarian and we discovered that we had met many years ago at another author event. We also found out that we both have an interest in birds, especially the California condor! 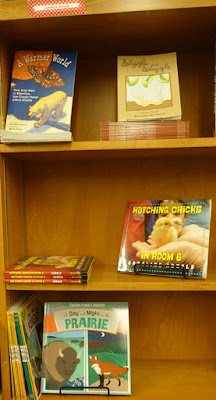 I also thank Jenna Carlston and the Bedtime Story Jam committee for inviting me and organizing this festive event. Afterward they sponsored a reception on the library patio for the authors-- a wonderful chance to relax, chat with other authors and enjoy delicious food. And I thank Mrs. Nelson’s Book Fair Company for supplying my books for the event. I was pleased to see that so many had already been purchased by the night of the Story Jam.

During the course of the evening I saw several families I knew and enjoyed meeting many other students and parents. Westwood Charter is one of my neighborhood schools and it is always a pleasure to be part of a local event.
Posted by five nests at 8:00 AM No comments: