Once a month I go to a book discussion group where we talk about children's books, usually one picture book and one middle grade or young adult novel. You can read our monthly reports at our new blog Book Chat Thursday.  We meet in the evening and everyone brings something to nibble while we talk. At our May meeting, I brought rhubarb squares, one of my favorite springtime desserts. (See recipe below.  We also have recipes as a page on our blog.)

Every spring I buy rhubarb at the supermarket.  And it never fails, as the rhubarb slides along the conveyer belt at the checkout stand, the checker always pauses, picks it up, and searches through her code book for the proper number.  Then after scanning it, she says, “Rhubarb.  What do you do with it?”

I make sauce, cake, and sometimes pie.  Nothing is quite as delicious as the sweet/tart flavor of fresh rhubarb. And I love the bright pink color.  I can’t believe that more people in California are not rhubarb fans.

When I was growing up in Minnesota, everyone ate rhubarb in the spring and no one bought it at the supermarket.  It grew like a weed in our side yards.  We simply went out and sliced off the stalks as needed.  Rhubarb was a gift of nature that appeared every spring as a reward for lasting through the long, cold Minnesota winters.  By summer, the stalks turned woody and inedible, ending the rhubarb season.  While it lasted, it was glorious.

I tried growing rhubarb in my garden after I moved to California, but between the winter rains and the clay soil, the roots rotted in the ground before they sprouted.  I’m sure rhubarb can be grown here, but not without a good deal of care.

Spread batter in 9" x 13" greased and floured pan.  Sprinkle with topping.
Bake at 350 degrees 45-50 minutes.  May serve with whipped cream.

This recipe is also good made with blueberries instead of the rhubarb.
Posted by five nests at 9:00 AM No comments:

I just learned that my book A Warmer World: From Polar Bears to Butterflies, How Climate Change Affects Wildlife, illustrated by Jamie Hogan, is on the Bank Street Best Children's Books of the Year List.  I am very pleased to be on this list that recommends good books for children ages Five to Nine.  I hope it will bring more readers to our book!
Posted by five nests at 9:19 AM No comments:

My brother Tom, a third grade teacher in Novato, California, loves to garden and loves to do art projects with his students.  In the fall, the children planted bulbs along the walkways by the classrooms.  By early March the tulips, daffodils and a host of other flowers had sprouted leaves and burst into bloom. 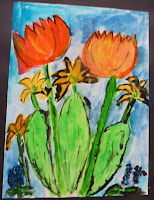 The students then took their drawing pads outdoors and sketched the flowers, making close observations of the shapes and colors of the plants.  Back in the classroom they turned their drawings into beautiful, colorful paintings–a perfect way to preserve and share the beauty of spring!
Posted by five nests at 9:00 AM No comments:

A book is challenged in a school or library in the United States almost every day. Just this month the Chicago Public Schools banned Marjane Satrapi's graphic novel Persepolis in middle school classes.


The good news is that the American Booksellers Foundation for Free Expression (ABFFE)--the bookseller's voice in the fight against censorship, is leading the fight against book censorship. Its Kids' Right to Read Project (KRRP), co-founded with the National Coalition Against Censorship, is providing critical support for the students, parents, teachers, and librarians who are fighting challenges in their local communities.
That's why ABFFE has agreed to co-host the 19th Annual Children's Book Art Silent Auction at BookExpo America. Proceeds will support ABFFE's defense of the free speech rights of young readers. The event will be held on Wednesday, May 29, from 5:30 to 7:30 p.m. in the River Pavilion of the Jacob Javits Convention Center.  There will also be an online auction. It begins on Saturday, May 18 at 9am and closes on Friday, May 24 at 9pm. It can be found here: http://myworld.ebay.com/abffe. Feel free to spread the word. ;) For more info, please visit the auction's website.
I have donated "Penguin's First Swim" from my book A Penguin's World (Picture Window Books, 2006) to the auction.  It will be available in the online auction. Check it out!
And, if you are planning to attend BEA, please stop by ABFFE.
Posted by five nests at 1:30 PM No comments:

This week the number of views of this blog passed the 20,000 mark!  Hooray!  I'm pleased to know that there is an audience for news about my books and art and appreciate it when people make comments.  The stats indicate that people from all over the world are reading the blog.  The top ten countries in order are the United States, Russia, United Kingdom, India, Canada, Germany, France, Australia, Latvia, and Brazil.
Thanks to all of you for your support!

Last Saturday I went to hear Kristin Fontichiaro, Clinical Assistant Professor and Coordinator of the School Library Media Program at the University of Michigan School of Information, and Roger Sutton, Editor in Chief of The Horn Book Magazine, talk about the new Common Core State Standards (CCSS) and how they are going to affect school and public libraries--and already are.  This was the spring workshop of the Children's Literature Council of Southern California, held in the wonderful, spacious library at the South Pasadena Middle School.

Kristin's lively talk, peppered with "I'm going to Italy!" in anticipation of her participation in an international conference on this subject in Rome, focused on the features of Common Core and some of the practical and political issues surrounding its implementation.  She discussed 10 things you (meaning librarians) can do to support the folks implementing CCSS and their students. The slides for her talk are on the web and you can see them here.  Roger focused on how the CCSS are going to impact the publishing of books for children.  The emphasis in Common Core is on nonfiction and developing skills for close reading of nonfiction texts--which may mean an increase in the number of nonfiction books being published.  Good nonfiction, he said, has a point of view and is scrupulously researched.  For nonfiction authors like me, it sounds like nothing has changed--we still must write the very best books we can!

Posted by five nests at 9:04 AM No comments:

Too Hot? Too Cold? at Children's Book of the Month Club 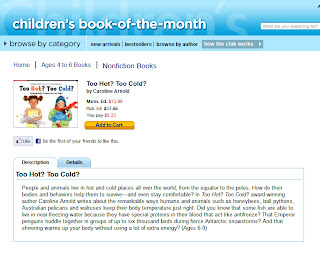 I just learned that my book, Too Hot? Too Cold? is now available at the Children's Book of the Month Club. "Offering members exclusive access to a rigorously curated selection of bestselling and quality children's titles, Children's Book of the Month Club selects only the best of the best in recent releases to offer to their patrons through monthly mailings."
I'm thrilled to have even more readers become familiar with my book!
Posted by five nests at 8:30 AM 1 comment:

Labels: Children's Book of the Month Club, Too Hot? Too Cold? 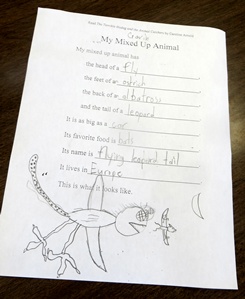 My two tall tale books, The Terrible Hodag and the Terrible Hodag and the Animal Catchers, feature a creature with the “head of an ox, feet of a bear, back of a dinosaur, and the tail of an alligator.”  (The first Hodag stories were  invented about a hundred years ago in Rhinelander, Wisconsin. My books are variations on those tales.)  On a recent visit to my brother’s third grade class in Novato, California, I asked the children to invent their own mixed-up animals.  They created some remarkable creatures, complete with illustrations! One of my favorites had the head of a fly, feet of a chicken, back of an albatross and tail of a leopard.  Its favorite food is bats! I hope that some of the students will now use their invented animals to write their own tall tales!
Posted by five nests at 9:00 AM No comments: