HAPPY GROUNDHOG DAY! Illustration from my book A DAY AND NIGHT IN THE FOREST 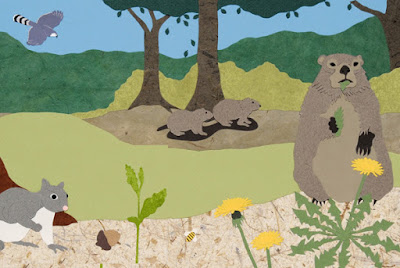 It is February 2nd, the day that groundhogs (also known as woodchucks) are reputed to come out of their holes to check the weather. Here's a groundhog (pictured on a spring day) from my book A DAY AND NIGHT IN THE FOREST wishing you a HAPPY GROUNDHOG DAY, where ever you are!

According to Wikipedia: Groundhog Day derives from the Pennsylvania Dutch superstition that if a groundhog (Marmota monax, also called "woodchuck"; Deitsch: Grundsau, Grunddax, Dax) emerging from its burrow on this day sees a shadow due to clear weather, it will retreat to its den and winter will persist for six more weeks, and if it does not see its shadow because of cloudiness, spring will arrive early. While the tradition remains popular in modern times, studies have found no consistent correlation between a groundhog seeing its shadow or not and the subsequent arrival time of spring-like weather.
Posted by five nests at 10:00 AM

Labels: A Day and Night in the Forest, cut paper, Day, Groundhog, Illustrations