EL NINO: Stormy Weather for People and Wildlife, Now available as an E-Book 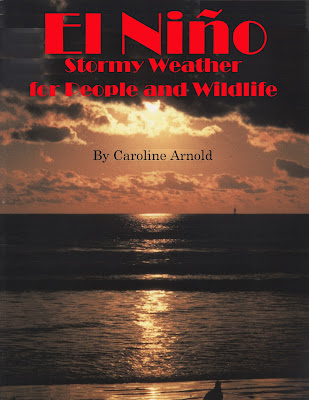 My book, El Niño: Stormy Weather for People and Wildlife is now available as a Kindle book on Amazon. For readers age 10 and up.

Drought in Southeast Asia, brutal storms in Australia, and spring-like temperatures in the northeastern United States--all of these seemingly unrelated events are caused by El Niño. Disrupting weather all over the globe every three to seven years, El Niño is second only to the change of the seasons in its influence on the climate.
El Niño is the name given to the unusual increase in ocean temperatures along the Peruvian and Ecuadorian coasts that is part of a larger pattern of changes in wind and weather throughout the Pacific region and beyond. With El Niño come violent storms and upsets in the global food chain that dramatically affect both humans and wildlife.
With the use of photographs, charts and maps, this updated edition of El Niño: Stormy Weather for People and Wildlife makes clear how this remarkable weather pattern is formed, how scientists track it, what its effects are, and why following its path is of such importance.

Originally published by Clarion Books as a hardback book in 1998, El Nino: Stormy Weather for People and Wildlife is an Accelerated Reader book. You can look for it in your library.
Posted by five nests at 8:00 AM