Amid all the momentous events of the past days, I learned that Virginia Buckley, my editor for more than ten years at Clarion Books, passed away on October 21, 2020, at the age of 91. Virginia had a distinguished career as a children’s book editor and I was proud to work with her. As one of Virginia's colleagues described her, she was “an old school editor.” She took a deep personal involvement in all the books she edited–from working with the author on revisions, to final editing and the production of the finished book. My years with Virginia were before the current age of online editing programs. My manuscripts were submitted on paper and came back peppered with corrections marked in red pencil. Comments were attached on yellow post-it notes to the side of the page. If a question arose, sometimes it was easier to discuss it over the phone. Together we made changes to make sure that the final product was the best that it could be.
Virginia’s  career in publishing began at Thomas Y. Crowell in 1971 and in 1980 she moved to Dutton to be editorial director of Lodestar Books. In 1997 she went to Clarion Books where she became my editor after Dorothy Briley, the editor I had worked with previously, died suddenly. Over the next thirteen years Virginia and I worked together on eight books.
Because Virginia lived on the East Coast and I in California, we did not meet in person very often. Occasionally I made a trip to New York, or I saw her at a national conference. The last time I saw Virginia was in 2005, when I received the Washington Post/Children’s Book Guild Award for Nonfiction for my body of work and she was invited to give my introduction at the award luncheon. (Unfortunately, my only photo of her is from that event and the picture is fuzzy because my camera did not work well in low light.)
Many of the books Virginia and I worked on were illustrated with beautiful watercolor illustrations by Laurie Caple. Laurie put as much effort into researching her artwork as I did in researching my text. Virginia told a story about how Laurie had purchased a giant fossil tooth as a model for her illustrations for my book Giant Shark: Megalodon, Prehistoric Super Predator. 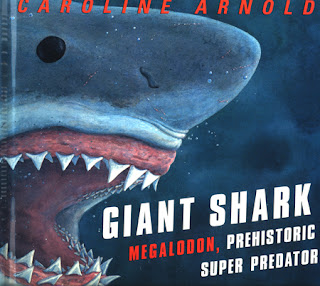 The last book I worked on with Virginia was Global Warming and the Dinosaurs, published in 2009, about dinosaurs that had lived in Earth’s polar regions. Virginia retired from Clarion in 2010 and I lost contact with her. I often think of her when I share my dinosaur and fossil books with children at my school visits. I was sad to hear of her passing. Her work will live on in the many books she edited, both mine and those of many other authors. 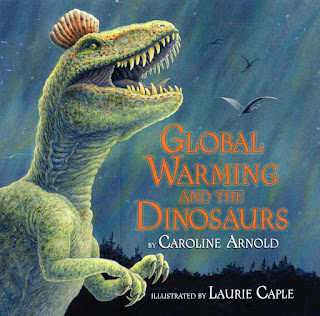 For more about Virginia Buckley and her work with other authors and editors, see her Obituary in Publishers Weekly.

She was a force! So sorry to lose someone so important to u!