MUSIC LESSONS FOR ALEX: The Making of a Photo Illustrated Children's Book 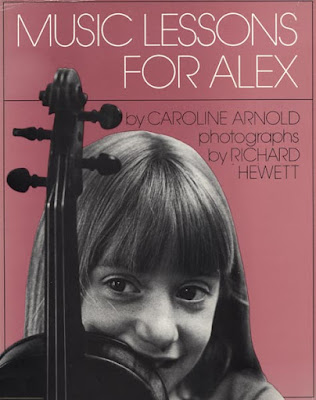 On August 3, 1985, the first copies of my new book, Music Lessons for Alex, arrived in California–just in time for the Suzuki Institute at UCLA. Although I have written over 30 books for children, the publication of this book is particularly special for me. Music Lessons for Alex traces the story of an eight-year-old girl, Alex, from the time she first begins violin lessons to her first recital nine months later. Like Alex, my own children struggled through beginning lessons, also experiencing the joy of progress, occasional frustration and disappointment, and ultimately the triumph of success.
Many children who begin music lessons become discouraged because they do not understand the process involved, and imagine that they will become virtuosos overnight. I wanted to write a book that might help children and parents realize that learning to play music is just like learning to read, play a sport, or any other skill–that it is a slow, gradual, step-by-step process which can be fun and which has rewards along the way.
In the spring of 1983, when I suggested my idea to my editor at Clarion Books in New York, she was interested. She remembered her own experience of playing the cello in her school orchestra and felt that if she had had a book such as mine, it might have helped her enjoy it more. We discussed how I would write my book and decided that it would be best to present the material in story form. The book would be illustrated by Dick Hewett, a Los Angeles photographer with whom I had worked before.
Dick and I were lucky to have the cooperation of so many people, particularly Alex and her family, Alex’s teacher, and the students and teachers of the San Fernando Valley Suzuki workshop program. We attended several o Alex’s lessons, during which Dick took unposed photos–trying to be as unobtrusive as possible so that the lesson would not be interrupted. He also took photos when Alex went to group lessons at the workshops.
When we assembled all the photos for the book we realized that there were some points that I had made in the story, such as tuning, correct placement of the feet,  practicing at home, that did not yet have illustrations, so we arranged to spend a day with Alex and Susan to take those photos. We also took photos of the Brentwood school orchestra to illustrated the point that as Alex progressed, playing in an orchestra was something to which she could aspire. We also wanted to show instruments other than the violin, for, although we had focused on the violin in our book, we felt that the basic process of learning to play music was similar for all instruments.
When the photos and text of the book were finished and assembled–a process that took several months–we sent them to our editor. Then we worked with her to refine and clarify details. One of the hardest things for me to remember was that because of my involvement in my own children’s lessons, I understood a lot of musical terms that a child or parent new to music lessons, might not. As I wrote, I had to keep asking myself, “What would I want to know about music lessons if this were my first introduction to the subject?” Finally, more than a year after we had submitted our completed project to our editor, the book was published.
As people attending the Suzuki Institute read Music Lessons for Alex, the people depicted in the photographs in the book discovered that they had become celebrities of a sort. Alex was even asked for her autograph by several people. I was pleased to have such a positive response to the book and hope that many children and parents will have the opportunity to read it.

Note: Music Lessons for Alex has long been out of print. A few used copies are available on the internet. I wrote the above description of the process of creating the book shortly after it was published. The article appeared in Ledger Lines, the newsletter of the Los Angeles branch of the Suzuki Music Association of California.
Posted by five nests at 8:00 AM