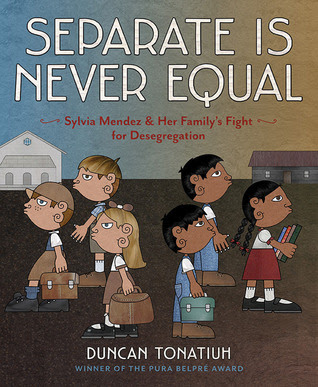 The FOCAL Award for 2015 has just been announced. The book is Separate Is Never Equal: Sylvia Mendez and Her Family’s Fight For Desegregation by Duncan Tonatiuh, published by Abrams, 2014.

Almost 10 years before Brown vs. Board of Education, Sylvia Mendez and her parents helped end school segregation in California. An American citizen of Mexican and Puerto Rican heritage who spoke and wrote perfect English, Mendez was denied enrollment at a “Whites only” school. Her parents took action by organizing the Hispanic community and filing a lawsuit in federal district court. Their success eventually brought an end to the era of segregated education in California.

For more information about FOCAL and the writing contest for kids, go to http://focalcentral.org/focalaward.php . Winners will meet the author of Separate Is Never Equal and have their essays read aloud at the Focal Award Luncheon in December.

The FOCAL Award Luncheon will be held on December 12, 2015 at noon.
Save the date on your calendars!
FOCAL (Friends of Children and Literature) is the support group of the Children's Literature Department at the Los Angeles Public Library.