THE BIGGEST BELL IN CHINA, published in Touchdown (The School Magazine in Australia) 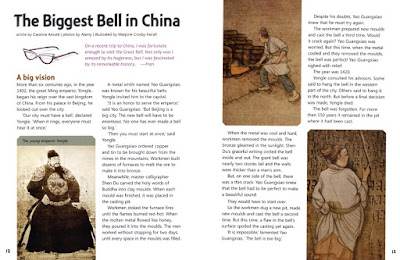 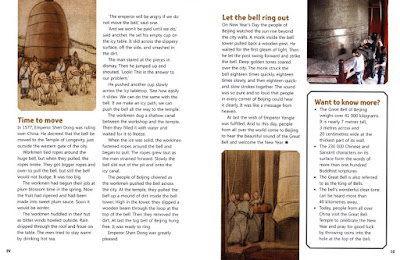 I am pleased to announce that my story The Biggest Bell in China has just been published in the September issue of Touchdown, one of the publications of The School Magazine in Australia. The subject of the story is the giant bell commissioned by the great Ming emperor Yongle, which now hangs in the Great Bell Temple in Beijing. More than twenty feet tall, the bell itself is impressive, but the story of how it was made and moved to the temple is fascinating as an example of Chinese ingenuity and provides insight into the importance of bells in Chinese culture and history. The Great Bell of Beijing is a type of bell called a chung. A chung has no clapper; instead, it sounds when it is struck on the outside with a wooden post or mallet.

I was inspired to write this story after I visited the Great Bell Temple on a trip to Beijing more than twenty years ago. You can read more about my visit to the Great Bell and see some of my photographs at my June 30, 2014 post at my travel blog, The Intrepid Tourist.
Posted by five nests at 8:00 AM